Categories: General, In the News

Yesterday, the United Health Foundation released the 30th edition of the America’s Health Rankings Annual Report. The 2019 Report was developed in partnership with the American Public Health Association (APHA) and looks back at key successes and challenges the country has experienced over the past year as well as the past three decades.

Among the key findings in the 2019 Report:

–       In the past year, improvements have been made in lowering the rates of smoking, infant mortality, children in poverty, and increasing the number of mental health providers

–       The premature death rate has increased for five consecutive years after generally decreasing since 1990. In the past year, the rate continued to significantly increase nationally from 7,432 to 7,447 years of potential life lost before age 75 per 100,000.

30 Years of Public Health Efforts Have Successfully Reduced Smoking and Infant Mortality – Yet Challenges Remain Across Diabetes, Obesity and Mortality

–       The U.S. infant mortality has reached the lowest rate in the America’s Health Rankings history, yet the United States lags behind most other developed countries. 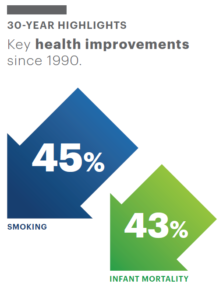 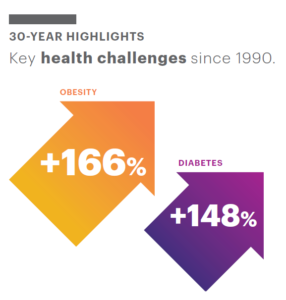 The Nation has seen increases in the levels of diabetes (+148%) and obesity (+166%) since 1990 and more recently, challenges have increased across mortality measures.

–       Vermont is the healthiest state in this year’s report, moving up three spots since last year and surpassing Hawaii for the top ranking. This is the fifth time Vermont has ranked in the top overall position in the past 30 years. Vermont is followed by Massachusetts, Hawaii, Connecticut, and Utah.

–       Mississippi has the greatest opportunity for improvement in overall health, falling one spot since last year. Mississippi is preceded by Louisiana, Arkansas, Alabama, and Oklahoma.

–       Although these state’s rankings have shifted, the top and bottom five states remain the same as 2018.

You can visit AmericasHealthRankings.org to learn more.