Pugliese Associates joined a multitude of Pennsylvanians, including several of our clients, to celebrate the inauguration of Josh Shapiro as the 48th Governor of Pennsylvania and Austin Davis, as the first African-American Lieutenant Governor of the Commonwealth. The mild January day began with both Shapiro and Davis being sworn-in to their offices. Governor Shapiro’s swearing-in remarks were dynamic and enthusiastic as he spoke broadly about his vision for Pennsylvania, telling the audience how he was inspired by all the Pennsylvanians he has met throughout the state. A little earlier in the day, LT Governor Davis captured the attention of the Senate Chamber with his inspirational success story and a heartfelt call for everyone in state government to get to work.

Pugliese Associates had an open house throughout the day where a number of clients stopped by on the way to and from the swearing-in ceremony. 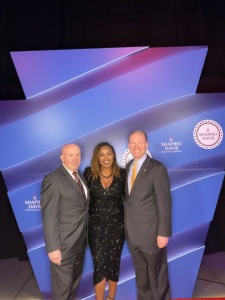 With the formal requirements of the day accomplished, the Governor, LT Governor, and several hundred of their closest friends moved to Rock Lititz in Lancaster County for the Inaugural Ball – and what a ball it was! This is the first time Rock Lititz – a premier music venue used by all the top names in the industry – was visited for such an event. Given the success of the night, it may not be the last. Depending on who you ask, the evening was either an excellent opportunity to hobnob with legislators, the Governor’s cabinet members and nominees, and other key influencers, or it was simply the best way to try just about every awesome food and beverage item offered in this great commonwealth! Whatever the case, there were quite a number of folks that we interact with daily in the Capitol. No matter who we talked to, the conversions included, “did you try the…” and “what’s going to happen with the legislature?”

Opportunities for bipartisan bonding seem to be fewer and fewer these days, but the Shapiro/Davis Inauguration gave us all a break from that trend. From the first introductions at the swearing-in to the final mike drop at the ball, the day left attendees feeling hopeful about what is to come under the new administration.